I can’t even put into words how poor my fantasy picks were this week.

Following a promising victory last week that pulled Team Torch even with the Bulldogs at 2-2, Ferris stormed right back to the tune of a 116-48 victory.

Obviously, my downfall was caused by my picks at the FLEX, kicker, tight-end and running back one positions. Hunter Henry, Cory Clement and Leonard Fournette were all ruled out of their games this week with injury. As for Robbie Gould, he missed his only kick of the day, sending him into the negative.

The only real bright spot for Team Torch this week was Panthers’ quarterback Cam Newton, and even he failed to post the gaudy numbers expected of him. On the flip side, the Bulldogs had one of their best performances fantasy-wise as they defeated Michigan Tech. University 42-24 Saturday, Oct. 6.

Ferris junior quarterback Jayru Campbell again led the team, throwing for 291 yards and three touchdowns while adding another on the ground. Ferris redshirt freshman receiver Sy Barnett continues to be Campbell’s favorite target, compiling 132 yards on eight catches and a touchdown. The defense continues to post low scores. Their lack of sacks and interceptions contribute to that, as well as the amount of points allowed.

With the Bulldogs winning, they jumped back in front and are now 3-2 on the year in Fantasy Football. I’m expecting to outscore the Bulldogs this week as they take on Grand Valley State University 7 p.m. Saturday, Oct. 13. The Lakers are ranked one spot ahead of Ferris nationally at No. 2, so I’m expecting a low-scoring affair.

QB: Mitch Trubisky – Chicago Bears: Trubisky threw for six touchdowns two weeks ago, then had a break for his team’s bye week. A good matchup with the Dolphins will help him repeat.

WR1: Alshon Jeffrey – Philadelphia Eagles: Jeffrey is a big target and he’s got his starting quarterback in Carson Wentz to throw him open.

TE: Kyle Rudolph – Minnesota Vikings: The Vikings have plenty of targets, but Rudolph is by far the biggest and strongest.

D/ST: Seattle Seahawks: The Seahawks play the Raiders this week, and boy, have they struggled on offense. That’ll help Seattle make big plays. 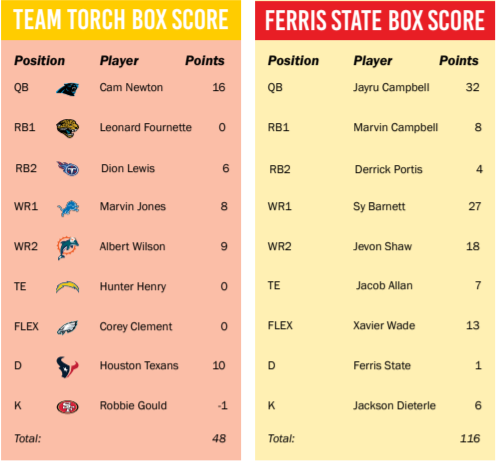