Legalizing recreational marijuana is arguably the most talked about issue on this year’s ballot and has already garnered a lot of support and backlash.

If Proposal 1 passes in November’s election, Michigan will become the 10th state to legalize recreational marijuana. The proposal would allow for individuals 21 and older to possess and use marijuana and marijuana-infused edibles, and allow them to grow up to 12 marijuana plants.

“Almost all of my friends use marijuana, and I would estimate that 50 percent of everyone I know smokes marijuana already,” Ferris pre-pharmacy senior and Students for Sensible Drug Policy President Monica Pittiglio said. “Over half of the states in America are already implementing medical marijuana programs. When you really step back and look at the bigger picture, we’re already moving towards
national legalization. This is all just a matter of time.”

Two of Michigan’s gubernatorial candidates support recreational legalization — Democrat Gretchen Whitmer and Libertarian Bill Gelineau — while Republican candidate Bill Schuette has expressed his disapproval, but said he would “respect the will of the voters” if the proposal passes. Even if Proposal 1 passes, it is highly unlikely marijuana will be allowed on Ferris’ campus.

“The drug-free schools act is a federal law that says we can’t have marijuana on campus even if it becomes legalized, so I don’t envision that even if the law passes that it would be allowed on campus,” Ferris Department of Public Safety Director Bruce Borkovich said. “It means that now it’s a university rule and student conduct process, not a police process.”

Borkovich also spent time at a Political Engagement Project event arguing some of the negative impacts of passing Proposal 1, including more than 100 percent more traffic deaths where marijuana is involved in Colorado since it became the first state to legalize.

“The yearly rate of emergency room visits related to marijuana increased 52 percent [in Colorado], so 52 percent more people after it was
legalized are going to the hospital, and there are pretty high numbers of people who have actually been admitted,” Borkovich said.

Some students say that they already know a lot of people using marijuana and that the 10 percent tax rate on marijuana purchases will be good for the economy while also allowing people to use marijuana without breaking the law. 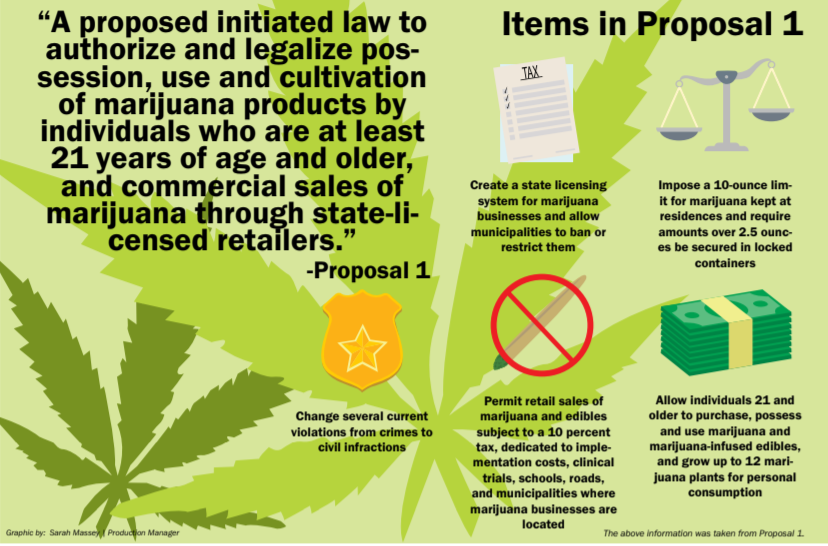