Ferris theatre professor and artistic director Katherine LaPietra is holding auditions for what she says is Ferris’ longest titled play yet.

Ferris’ upcoming spring production, “The Curious Incident of the Dog in the Night-time,” is the tale of a 15-year-old boy who sets off on an adventure after his neighbor’s dog is killed. The boy, Christopher, is on the Asperger’s and autism spectrum which causes him to take everything literally while also naturally excelling at mathe- matics. Throughout Christopher’s journey, he learns how to navigate through his world versus the “real” world.

“If you say a metaphor like, ‘he was the apple of her eye,’ he can’t figure that out, all he can think of is an apple in somebody’s eye,” LaPietra said. “But he’s better at math than almost anybody so it’s a really interesting dichotomy to see.”

Ferris nursing junior Leanna Kwilos has been involved in plays since sixth grade, including every Ferris production since her freshman year.

“It’s like this really crazy rush,” Kwilos said. “Other people skydive to get that burst of energy, but for me going on stage and being in front of an audience makes me feel incredibly calm yet so excited.”

Ferris psychology senior Emily Cortes has been in Ferris productions since her freshman year and encourages students who are interested in the production to audition, even if they’re nervous.

“Just do it. Just get out here, it’s so much fun,” Cortes said. “If you get it, that’s awesome and even if you don’t, you still put yourself out there. You can as well meet people there at auditions and make new friends.

Even students who have never performed in theatre are welcome to audition, LaPietra said.

“I’ve had people who have had large roles and have never done anything before,” LaPietra said. “It’s an all-inclusive program and we really work hard to do that because the point of doing theatre here is because you love it.”

The roles for the production are not limited to those interested in acting. When producing a show, many extra hands are needed.

“We need lots of behind-the-scenes people too,” LaPietra said. “There’s all sorts of items that we need help with. We have people who do costume designs, set building and painting. For some people it’s a really good connective tissue. We have people who help build the sets in construction management. People who help with the sound are in music management. You don’t have to be but it’s a good connective tissue.”

Rehearsals for the play typically run Monday through Thursday from 7 p.m. to 10 p.m., though students who have conflicts during that time may be accommodated by LaPietra if she is made aware.

Auditions for “The Curious Incident of the Dog in the Night-time” will be 6:30 p.m. Monday, Jan. 28, and Tuesday, Jan. 29 at Williams Auditorium. For more information on the spring production contact LaPietra at 231- 591-2704 or KatherineLaPietra@nullferris.edu. 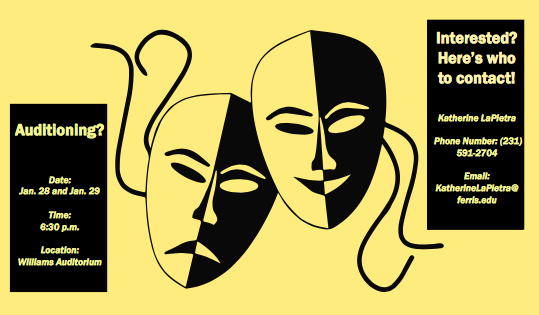