Through the highest of highs and the lowest of lows, the six seniors of the Ferris hockey team have grown into leaders of the program over the last four years.

According to Ferris hockey head coach Bob Daniels, the group has been one of the best displays of leadership he’s seen during a season that left them all wanting more.

“We’ve had a hard year — we haven’t had a year like this in a long time, maybe never. So it’s a really tough deal and yet, through it, that class has kept things together,” Daniels said. “We’ve never stopped working in practice.”

Among the seniors, who are all graduating this spring, are four forwards: Jacob Hetz, Trevor Recktenwald, Craig Pefley and captain Corey Mackin. The other two seniors are defensemen: Zac Tierney and alternate captain Ryker Killins.

“They control the locker room,” Daniels said. “So, I’m thankful to them for a lot of things, but I think this might have been one of the better leadership jobs I’ve ever seen because it’s not fun losing and losing at the pace we are. It’s not fun but they’re keeping it together.”

The group was in their freshman year when Ferris won the Western Collegiate Hockey Association playoffs, the first time in program history the team had brought home the trophy. They went on to the NCAA West Regional Final where they lost to Denver, but the postseason run is a favorite memory for Recktenwald, Killins and Mackin.

“It was really cool to be able to win that in Grand Rapids and be able to bring the trophy back here to Big Rapids and share it with the community,” Recktenwald said.

After freshman year, the team seemed to be on a downward spiral the next three years, posting a losing record each season. Challenges were faced by the team and by individuals, including major injuries for Mackin that led to two surgeries the summer before his junior year, and minor injuries for Killins that kept him benched for nearly half of his senior season.

For Killins, it was one of the hardest trials he overcame in his career. After suffering from a concussion that kept him out of play for a short time, Killins sustained a high ankle sprain during the first period of his first game back this season, according to Daniels.

“Probably my ankle injury this year, especially it being my senior year, missing the amount of time I did — that was probably one of the toughest things I’ve had to do,” Killins said.

Daniels said Killins’ dedication to his recovery was encouraging to the rest of the team, even though he didn’t travel and was somewhat detached from the team at times.

“He was always encouraging, though,” Daniels said. “But I think one of the things we all appreciated was how hard he worked at coming back. He would come in twice a day for treatments on that ankle and I think there was a leadership quality there of how hard he worked to get back and he got back from a high ankle sprain as quick as you can. Probably earlier than we thought he would, we thought he might even miss the whole year. So to see that kind of desire kind of play out, that’s leadership by example at that point.”

The most vocal leader on the team is Mackin, according to Daniels. It’s one of the qualities that earned him the position of captain this year.

“It helps when your captains are vocal and it helps when they’re really good players,” Daniels said. “But you know I appreciate when they’re vocal, but not to the point where it’s overbearing. If Corey were to say something to a player like, ‘Hey, your practice habits need to improve,’ it would really hit home because he’s not the kind to say something like that unless it was really called for.”

Mackin said when it got tough this season, he knew he had to stay positive and keep up the energy throughout the team.

“We knew we were playing pretty good hockey, just pucks weren’t bouncing our way. So, we just needed to try our best to keep positive energy on the bench, through practice, in the workout room and just keep the positive energy going and keep bringing it day in and day out,” Mackin said.

In his final game as a Bulldog, Mackin reached a career milestone that put him in rare company. He not only reached 100 career points, but he went above and scored two goals to get 101 career points in the 3-2 win Saturday, March 2, against Lake Superior State University. Mackin’s second goal was also his 10th goal of the year and he became one of the few to score 10 or more times in each of his four seasons at Ferris.

According to Daniels, the seniors are very tight-knit and will be lifelong friends as he sees it. The group of seniors also carries greater than a 3.5 GPA individually, and their dedication to academics exceeded his expectations.

“I guess one thing I have been pleasantly surprised by is the quality of students they all are. I think sometimes, too, that’s a cultural thing that when certain guys, academics is really important to them and they study a lot. It kind of pulls everybody along and I think that helps,” Daniels said. “I think that class as a group has a culture of really achieving in the classroom, and I think that that’s helped permeate in our younger kids, too. They learn from the older guys.”

Killins and Recktenwald agreed that getting a degree was one of their most important goals and it’s the reason they’re at Ferris.

“I think we have a very high work ethic and a very high standard that we all hold each other accountable to and you can see it on the ice.

We’re working really hard in practice, in games, and it translates over into the classroom as well,” Recktenwald said.

Despite finishing the season with one of the worst records the team has seen and being left out of the playoffs for the first time in program history, Recktenwald and Killins voiced their gratitude for the opportunity to play college hockey.

“At the end of the day, we’re all playing a game that we love, so that’s always something to stay positive about and not get down about,” Recktenwald said. 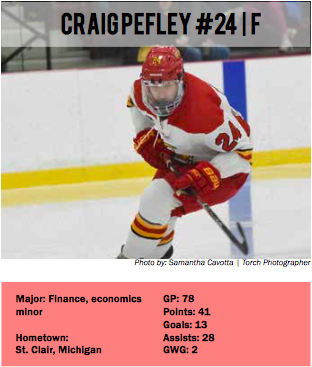 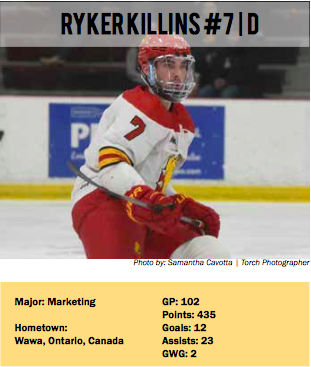 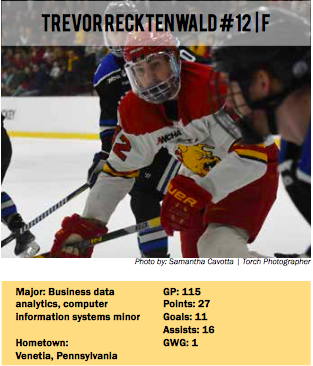 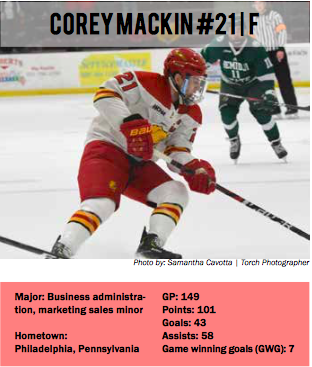 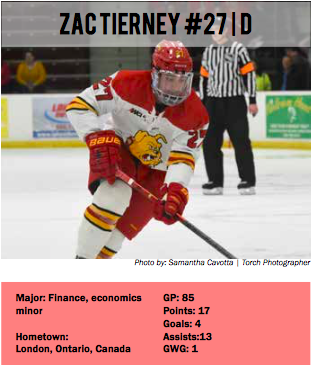 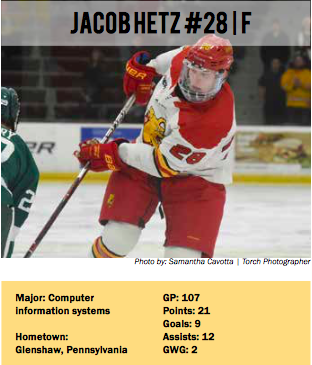