The Ferris men’s tennis team showcases much diversity, so much so that international players outnumber American-born players by a signicant amount.

The team comprises eight students from locales ranging from Indonesia to France. With just two students from the United States and just three from North America, the tennis team brings in great talent from all around the world, which not only makes the team better, but makes a great time for the individuals and their college experience, according to Ferris men’s tennis interim head coach Mark Doren.

“We have so many different cultures,” Doren said. “So many different lifestyles that the opportunity for them to learn from each other, but also our American players to kind of have that sense of other cultures around them, has really been awesome.”

The Bulldogs, who are 2-8 throughout the season, have played the majority of their games indoors due to the region’s hazardous weather. To some international players, this can be a challenge they have to overcome as Bulldogs.

“First of all, the surface and the weather is different,” Ferris junior Pablo Munoz Baroja said. “Being from Spain, the most common surface is clay instead of hard courts, and you always play outdoors because the weather is a lot nicer than in Michigan.”

To travel all the way to Big Rapids and discover Ferris of all the options throughout the United States and home countries can be quite a struggle. With the advancement in technology, however, it has become easier for coaches and players to connect, what with certain websites that help both parties nd a college to play for.

“There’s four or five internet websites that you can go on and players will put themselves on these websites,” Doren said. “They’ll describe their playing ability, they put videos of their tennis on these websites and then they talk about their academic scores and all that type of stuff, so you can get to see where they fit academically and athletically.”

The main reason Ferris sees so many tennis players from different countries, especially from Europe, is because there is not a lot of opportunity to play sports like football or basketball, so more kids start out playing tennis, according to Doren.

Playing in the United States and for a Division II university makes for great experiences and is a great way for players to improve their style of play. For plans after college, many students intend to return home.

“I’m planning on going back home once I graduate, for sure,” Baroja said. “I will be working and living in Spain but I won’t take tennis very seriously, I will just play for fun if I have time.”

The Bulldog men’s tennis team has had great success in previous years, with not having more than five losses in the past three seasons. Not only was Ferris’ success a factor when these international students decided to come play here, but some family ties made them familiar with the state of Michigan.

“I was looking to study in the USA with a tennis scholarship so I talked to a lot of tennis coaches from many different universities,” Baroja said. “After that, some of them were interested in having me play for them and I decided with the option that best fitted my situation. In my case, I had an uncle living in Detroit and I received a good scholarship, so I decided to come to Ferris considering all that.”

The Bulldogs return to serve Saturday, March 23, where they head north to begin conference play against the Michigan Technological University Huskies. 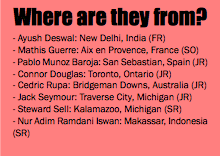