With scores of two- and three-dimensional fans in attendance, the Bulldogs held tough against the Cowboys of Wyoming University.

A defensive struggle was the order of the day as the Bulldogs struggled to stop the defensive line of Wyoming.

To open up the game, Wyoming quickly drove down the field running a balanced attack of runs and passes. They got to the two-yard line before the Bulldog defense stiffened up. Holding Wyoming to a short field goal, the Bulldogs answered with a healthy drive of their own.

In the second quarter, Ferris drove down to the goal line again with a mixture of Jayru Campbell’s arm and legs. Once again though, the Bulldogs were stopped short. Another field goal was in line for the Bulldogs.

A defensive struggle entailed most of the half, with many punts keeping each team from getting momentum. That changed with a strong defensive play by the Bulldogs, with Alex Thomas picking off Wyoming QB Sean Chambers’ pass and returning it for a touchdown to go up 13-3 at the half.

Late in the third quarter, Wyoming’s offense kicked into gear, with multiple powerful runs up the middle by Wyoming running backs Xazavian Valladay and Trey Smith. This allowed for a 46-yard field goal to make the score 13-6. After a Bulldog punt, the Wyoming run game took over. Running through the teeth of the Bulldog defense, Wyoming punched it in with Smith from seven yards out to tie the game at 13 apiece.

To begin the fourth quarter, Wyoming once again in field goal range, making the kick to go up 16-13 with 8:23 left. The Bulldogs offense struggled to move the ball the rest of the game, with two three and outs. Wyoming took advantage and pulled away with another pair of field goals, leading the way to a 22-13 win.

Wyoming kicker Cooper Rothe was the star of the game making five field goals including kicks from 46 and 50 yards. Ferris kicker Jackson Dieterle made his pair of short field goals.

Quarterback Jayru Campbell got the start for the Bulldogs on the day after a close battle with Travis Russell to open the season at QB. He would have a tough day at the office, getting sacked ten times by the Cowboys defense while throwing for 222 yards on 39 attempts. Jayru Campbell also was able to lead the Bulldogs in rushing with 50 yards on 22 attempts.

Most attempts were below five yards down the field, with many throws going to running back Marvin Campbell, who had twelve receptions on the day but for only 29 yards. Xavier Wade led the team in receiving yards with 109 yards on six receptions.

Defensively, the Bulldogs allowed 311 yards. 201 yards rushing and 110 yards passing. They did achieve five sacks on the day along with scoring the only Bulldogs only touchdown. Defensive back Alex Thomas led the team in tackles with 11 along with the one interception.

The schedule does not get easier for the virtual Bulldogs, with a matchup against #16 ranked Michigan State Spartans led by quarterback Brian Lewerke, who is performing surprisingly well with four touchdowns to zero interceptions on the season. 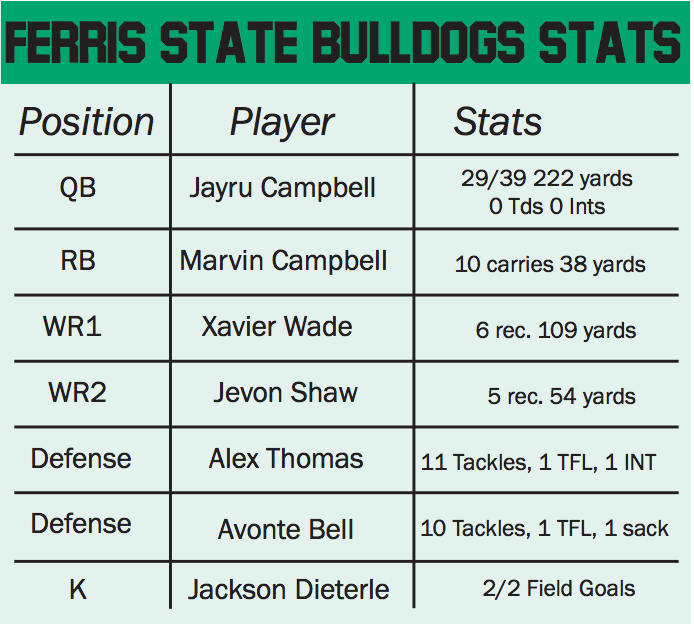