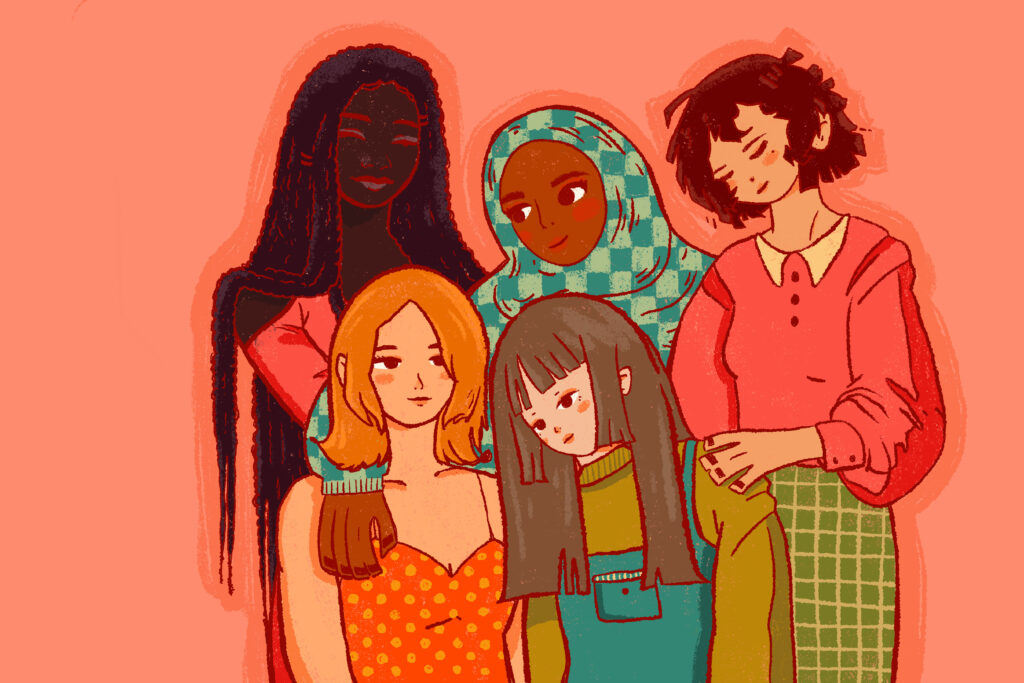 Being a woman is certainly not for the faint of heart, between the gender pay gap, and the prevalence of sexual assault and harassment, there are definite challenges I have experienced as a woman. However, I am still proud of my gender identity, a big reason for this is because women so often support and lift one another up in ways that inspire and encourage me.  As society continues to grow and change, the idea of what defines a woman is changing as well. Women now have much more freedom to express themselves, to wear what makes them the most comfortable, to marry who they desire, to work whatever job they want, and to go against traditional gender roles if they so choose. Women weren’t handed power the way men were, every right we now have we’ve had to fight for, that makes us resilient, outspoken and powerful.  What makes women powerful is our unity, our strength in numbers, despite our differences coming together to make change again and again and again.

What do I love about being a woman? I love the power that it holds. Being feminine, being a woman, anything in that realm is looked at so negatively or even pitied in the face of sexism or inequality. But I think that being a woman is powerful and should not have the stigma behind it that it does. Yes, sexism is very real and current, but it does not overtake the definition of what is truly means to be a woman. We are powerful because we take what we deserve. We fight for our rights, and we fight to be equal. Before this year, being a woman to me was just that. After I researched feminism and took a class that educated me on sexism and inequality, I now can say that it is so much more to me. Being a woman is not just my sex, it is a part of who I am and that makes me feel empowered. The thing is, as women, we’re used to people trying to make us feel powerless and we don’t let it happen, that what makes us powerful. We are undermined and the fact that we rise above and prove ourselves makes us powerful. Being a woman is powerful, regardless of what society makes it look like.

One thing I love about being a woman is the default support of other women. In my experience, there is a default expectation –you might even call it a “girl code”- for women to support one another. We all seem to understand that it is hard out there, especially for us ladies, and by helping each other we are helping ourselves. For example, the recent Pixar hit “Turning Red” is the first Pixar movie to be directed by a woman. To give that context, there have been twenty-five Pixar feature-length films, and somehow this is the first one with a woman director. That’s one of the reasons I watched the movie, I wanted to support another woman. Her success will lead to more women-directed Pixar films and just woman directors in general. This type of support extends to smaller things, like going out of the way to shop at women-owned Etsy shops or leaving good reviews at women-owned businesses. I love that instinctive to support one another. Whenever I partake in this girl code or witness it happening, I feel like I’m part of something bigger than myself. In a way, it’s a default support of the future.

Pink, barbie dolls, skirts and other cutesy things. These are what femininity is ‘supposed’ to look like. Objects with bows and ribbons are shoved in our faces and little girls are told to wrap their personality into this feminine ideal.
Because femininity seemed like this two-dimensional ideology, I thought I was never going to be able to enjoy being a girl. I was raised with boys, so I knew the different shades of mud better than pink and all the names of tools in a tool box. I learned after years of struggling that everyone was wrong about what a female should look like. I can make feminism look like whatever I want it to be, and it is not linear and can change constantly.
Femininity doesn’t look like this for me. Being raised by a single mother made me see femininity as hard work and dedication and not being put into a box people already assumed you belonged in. There is no specific way it must look because femininity looks like whatever you want it to be. There is no correct way for it to look. For me, I enjoy having black nails and high heeled boots with spikes and not being something everyone expects.
-Marissa Russell
Tweets by @FSUTORCH