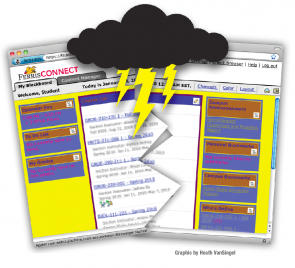 With the recent problems FerrisConnect has been experiencing, some students are concerned about being able to complete their assignments.

FSU Information Technology Services staff and Blackboard, the service associated with the FerrisConnect system, have been working together to solve the problems that began in the fall.

One explanation for the problems is an issue described as “persistent users,” or users who do not log out of the system. Roberta Teahen, associate provost, said she does not think the students are persistent users, it’s the server that does not log them out.

She said that FerrisConnect has multiple servers and whenever users do not log out of the system, the server becomes overloaded and shuts down.

Kayla Konway, technical and professional communication student, said, “It’ll kick me off after a few minutes and when I go on Blackboard, it takes forever to load.”

Konway feels that if FerrisConnect is down and students cannot submit their assignments, it should not count against them.

She said, “The problems with FerrisConnect are ridiculous. A lot of students have classes where the professors have quizzes and tests for you to take on there and they have deadlines…how are people supposed to take them if they can’t get on there?”

Felt also said, “Why should we be punished by our grades being lowered if it’s not our fault?”

Teahen said the IT team has been working with the Blackboard technical people for months to solve the problem and identify particular things that might be prompting this to happen.

“We are told by Blackboard that they are aggressively working on it,” said Teahen.

Blackboard Inc. Senior Vice President Craig Chanoff submitted a letter to the faculty and students of Ferris apologizing for the challenges some have experienced accessing the FerrisConnect system.

The letter states the engineers at Blackboard are working closely with the technical staff at Ferris to troubleshoot the problem and determine how it can be resolved as quickly as possible.

“It isn’t solved yet,” said Teahen of the on-going issues.

IT Director John Urbanick and e-learning Administrator Mary Holmes have taken the lead on fixing the problem. She said Urbanick has conducted many conference calls with Blackboard.

Both Holmes and Urbanick could not be reached for comment prior to deadline.

“Our greatest concern is we do not want courses disrupted for faculty or students,” said Teahen.

She said the IT team and others focused on fixing the problem have decided that they could not wait for the Blackboard solution and have purchased and will be adding two additional servers.

“We had to do something to make sure our students aren’t impaired,” said Teahen.