In light of the recent earthquake in Haiti, Ferris has developed an effort to help send donations and aid to the devastated country.

Three of the organizations that are helping lead the effort include Student Government, the Office of Multicultural Student Services, the Student Affairs office and the Athletic Department. The money gathered by these efforts will go to the American Red Cross and the Salvation Army.

The two primary administrators who are heading this project are chief diversity office David Pilgrim and vice president of student services Daniel Burcham. They were called on by president Eisler after news of the earthquake reached Ferris to help take the lead in gathering donations.

“This university has responsibility to not only our nation, but also to the world,” said Burcham. “We hope everyone gets involved because there are people without food and water.” 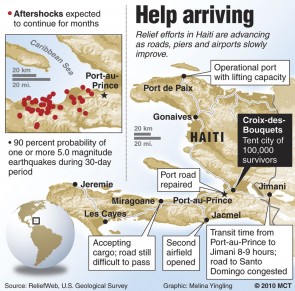 Eisler also commented on the disaster on Jan. 25 mentioning the $650 that has already been raised and urging everyone to donate what they can.

“If you have not done so already, please consider helping. The images from Haiti are truly heartbreaking. And although millions of dollars have been raised from all across the country, the devastation has created challenges that will require years to rebuild the country,” said Eisler.