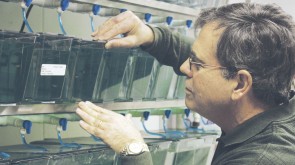 Dr. James Hoerter is interested in finding out what causes the early stages of melanoma by studying zebrafish.

Hoerter and his Biology 103 lab recently started using zebrafish as a model to investigate the early stages that lead to melanoma.

Hoerter, a professor in the Biological Sciences Department, spent a semester in Ireland while on a U.S. Fulbright Fellowship trip. While on the trip, he worked with the radiation and environmental science group on the cellular and subcellular responses to radiation. After encountering several labs in Ireland using fish for research, he was impressed with how zebrafish were being studied to indicate the main cause of melanoma.

“What we don’t know is how melanoma really begins,” said Hoerter.

He explained that melanocytes, which are stem cells in the skin, might be involved in UV-induced melanoma.

Hoerter said he received several grants to begin the research project, adding that Ferris purchased the chamber
for the zebrafish.

“To test our hypothesis, we have to irradiate melanocyte stem cells. The zebrafish are treated with a non-toxic chemical solution that eliminates all adult melanocytes,” said Hoerter. “Afterwards, we irradiate them and observe the fish to see if they develop melanoma.”

“Zebrafish have genes that are very similar to humans,” said Hoerter.

Hoerter explained the process that plays a role in the cause of early stage melanoma. He said that when a melanocyte is killed, a stem cell receives the message and produces new stem cells.

UVA rays might be contributing to melanoma, said Hoerter. The zebrafish model is being used for research to discover if UVA rays are the main cause, rather than UVB rays, “which can cause other forms of skin cancer and melanoma as well,” said Hoerter.

Hoerter credits Richard Marble, the director of the Animal Care Facility, for helping out with the project and students Ryan Freye and Kristen Eischens, who are interested in helping him out. Some of Hoerter’s students are coauthors of his research papers on the experiment.

“I really depend a lot on my students,” said Hoerter.

Editor’s Note: be sure to check out the feature photos.