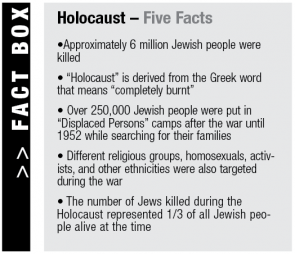 These three survivors of the Holocaust are part of a series of events beginning tonight to discuss art in relation with their experiences during the Holocaust.

Holocaust Art: A Panel Discussion of Art, Literature, and Music is the event that brings these three artists to Big Rapids as a part of the “Art in the Holocaust” series in the Festival of Arts. The panel will talk about the interaction between art and the Holocaust and allow the audience to ask questions throughout.

Miriam Brysk, a painter, and Helen Degen Cohen, an award-winning writer and poet, are Jewish survivors of the Holocaust. John Guzlowski, a writer, is the son of non-Jewish Holocaust survivors that were captured during WWII by the Nazis.

Cohen is the mother of Dr. Scott Cohen, a professor of music and the director of multiple music programs at Ferris. Dr. Cohen helped coordinate this event and many others for the Festival of the Arts.

Brysk and Cohen were held captive together during WWII. Cohen escaped execution during that time and the two lost contact for 60 years. They were finally reunited in 2008.

“Until my mother and Miriam came into contact a couple years ago, neither one of them knew whether the other was alive or not,” said Dr. Cohen.

Guzlowski was born right after the war in a Displaced Persons Camp that Cohen was being held in after the war. He later became a fan of her writing and once met her very briefly at a conference.

“The week of February 22 will be quite a reunion for these three artists,” said Dr. Cohen.

Dr. Cohen said, “I think it is a good idea to have an event like this because it’s an opportunity to share with people that under the worst imaginable conditions, the human spirit can endure and thrive through the arts.”

Maryanne Heidemann, professor of languages and literature, said the Holocaust was a product of Hitler’s Nazi Germany, which ended in 1945. She said that in the 65 years since then, the Germans have worked to understand and overcome this horrific part of their past.

“Some of the concentration camps have been turned into memorials so that people in general can think about ways to prevent such a thing from ever happening again,” said Heidemann.

Two more events relating to the Holocaust will take place on Feb. 25 as part of the “Art in the Holocaust” series. One event will feature art depicting the “Children of the Holocaust” and the other will be a poetry reading by Helen Degen Cohen detailing her life.

Cohen has received numerous awards for her writing and poetry. Her reading will include many different pieces from her works including “On a Good Day One Discovers another Poet,” “Habry,” and many others.

Brysk was a professor before becoming a writer, lecturer and artist on the Holocaust. The art being portrayed at the festival was inspired by a Jewish rite of passage called a Bar Mitzvah. Most of the children in the Holocaust never had a Bar Mitzvah and the artwork is a gift to those children from her in memory of that.

Dr. Cohen said, “Hopefully students will learn a little more about the Holocaust and be touched by the artworks that resulted from these experiences with it.”