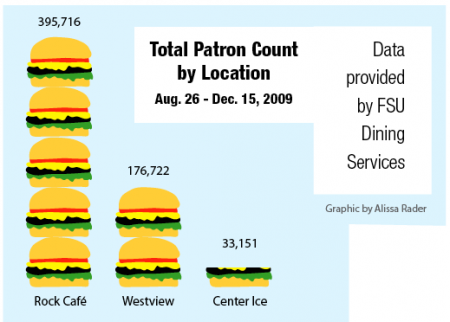 Ferris State University’s Center Ice food court will not be reopening for the 2010-11 academic school year.

Located on Bond Circle Drive on the campus’ west side, Center Ice will become the second dining hall to close since the renovation of The Rock Café, along with Mascar Grille.

Director of Dining Services Lori Helmer said many factors were taken into account when deciding to close the two dining halls. Helmer said both the choice to expand Westview’s dining hours and the consolidation of the campus’ dining staff were two major reasons for the decision.

“The students from west campus are letting us know through foot traffic that they prefer to dine at The Rock Café,” said Helmer.

The initiative will also save the university an annual cost of approximately $450,000 in labor. An estimated annual cost of $85,000 will also be saved in kitchen equipment, utilities, custodial supplies and laundry services.

Journalism and technical communications freshman Kayla Konway currently lives in Cramer and said she enjoyed being able to eat at Center Ice. Konway said she feels Ferris should have considered other options when deciding on ways to reduce costs.

“Ferris can take other measures to save money,” said Konway.

To minimize student dissatisfaction with the decision, members of the Dining Services Management Team met with west campus students during fall hall contracting.

They only had themselves to blame for Center Ice having such low patronage. Restricting it to hours when everyone was in class meant that the diner was doomed to have bad business. It was working out just fine before they changed the hours to noon-7. The hours are what killed it.