For Blake Elder, Ferris Fest 2011 was a challenge and a learning experience at the same time.

This is Elder’s fourth year in college and first year at Ferris. Elder is in music industry management and an active member of Entertainment Unlimited. 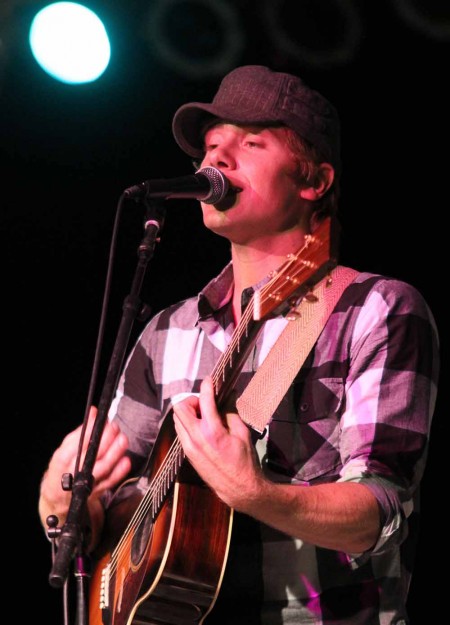 “Ferris Fest was a challenge unlike Turn up the Good or Autumn Alive. Anytime you have multiple stages and different groups, things get exponentially more complex,” said Elder.

Elder added, “It was a great learning experience running back and forth helping manage both groups.”

Elder was part of the stage crew for Entertainment Unlimited. He also helped with set-up and tear down between sets on the main stage, including helping out with communication between first and second stage.

Although Elder transferred to Ferris this year, he became very involved with Entertainment Unlimited and MIMA. In addition, he recently became the new president of MIMA for the 2011-12 academic year.

“Creating and working events on campus is something I am trying to learn as much about as possible because I transferred into the music industry management program at Ferris this year.”

Due to the weather that took place on the day of Ferris Fest, there were several changes, which included setting up the stage and equipment in a different location.

Ferris Fest was supposed to take place in the north quad, but due to the cooler temperatures and rain/snow mix, the concert was moved to the Wink Arena instead.

“I feel like given all of the last-minute changes due to weather, we all pulled the show off more or less seamlessly,” said Elder.

Since Ferris Fest included multiple stages and different groups setting up, managing communication and more tasks for the set-up crew to take on in a different location than previously planned, it was a bit more complex.

Being an active member in two groups, including being the new president of one of them, made the experience even more complicated for Elder.

“My favorite part of the show was learning how to create and manage an event as large as Ferris Fest,” said Elder.

Elder is now looking forward to next year as he gained a lot of knowledge from this year’s challenges with setting up for Ferris Fest.

“The ability to learn how to pull people together, sometimes in the moment – to keep the event going is an incredible piece of knowledge that I gained from this event,” said Elder.

Elder added, “Now that we know what to expect, EU president Lindsey Parker, booking agent Alex Lorenz, Bulldog Radio President Jess Giesler and I will be prepared, and a rocking team next year.” n