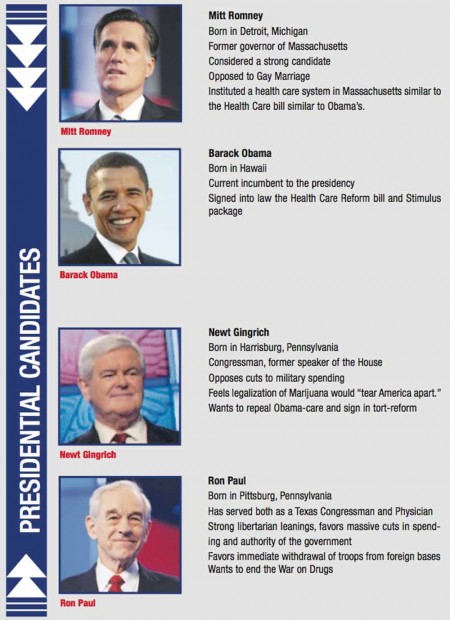 The upcoming presidential election promises to be a struggle. With no clear Republican candidate taking the lead, no one is sure what, exactly, the campaign between President Obama and the Republican nominee is going to look like come election time.

Amongst the Republican primary, we have a myriad of candidates with a variety of views. There’s Mitt Romney, Newt Gingrich, Herman Cain and Ron Paul amongst several others.

While some students do not report following the election or have any plans on voting, there is certainly a presence of students on campus who are interested in the election. Amongst the students questioned there did seem to be a tendency towards Texas congressman Ron Paul whose libertarian rhetoric resonates with some young voters.

“He’s the only person that’s serious about spending,” says Derek Nelson, a senior at Ferris, “out of all the Republicans and Democrats, I don’t trust anyone would bring the troops home except Ron Paul. He’s also the only one who will stop the lobbyists and seriously cut the power of the government.”

Adding to the Ron Paul craze is Kyle Perrault, a senior in pre-medicine. “The government has been growing out of control and infringing on our rights but Ron Paul favors a small government which upholds our rights, this country is on a path to ruin and Ron Paul wants to fix that. He’s not just another candidate paid off by big corporations.”

This fear of corporate control of our government is a fear that resonates with many people across the political spectrum. From more conservative movements like Students for Ron Paul to more left-leaning ones like Occupy Wall-Street, disgust with corporate influence over the federal government is likely to be a big issue which the candidates will have to address if they hope to come out on top of the election.

Still, while many seem to favor Ron Paul for the Republican Nomination there are many other voices to be heard here at Ferris. Many students do favor the reelection of President Obama, pointing to the fact that the supposed failures of President Obama have more to do with the overly contrarian Republican Congress blocking the President from any action he tries to take.

In regards to Obama’s presidency Tim Burke, a sophomore here at Ferris says, “he’s done the best he can with what he had to work with.” “He hasn’t really accomplished a lot,” adds Brett Bieth, “but you can’t really blame him when Congress shoots down every little thing he tries to do no matter what.”

Still, critical voices are heard about Obama amongst the students. “He’s increasing the size of government so much that it’s getting dangerously close to socialism,” says Kyle Perrault.

Amongst students, the big issues that they would like to see be addressed in the upcoming election are many. “The student debt, and tuition going up,” says Time Burke, “and how they want to cut social services instead of cutting the military budget.” Kyle Perrault adds not just concern for the military budget but “the amount of spending in the entire government and a lack of concern for our rights.” “The high cost of education is what concerns me,” says Brett Bieth. Student debt, spending whether in excess, not enough or a combination of the two, bringing home the troops and a corrupt influence of big corporations and lobbyists over our government seems to be what concerns young voters here at Ferris. These concerns are certainly ones we will hear more about in the months leading up to the 2012 election.

I really like the graphic with this article. One suggestion for the future may be to put President Obama at the top, as he is still our Commander in Chief. By doing so it also separates the Democrat and Republican candidates. Other than that, it’s very well done.