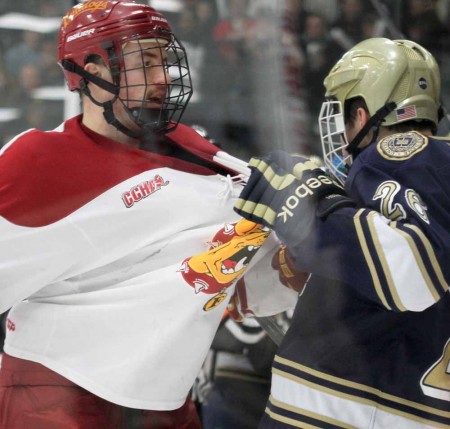 Ferris State handled Notre Dame by sweeping the Irish in a home and home series. Ferris remains to be the top team in the conference after the sweep.

The first period went scoreless, but Bulldog junior forward Kyle Bonis found the back of the net in the second period, scoring the Bulldogs’ first two goals. He scored his first on the power play and his second came with 22 seconds left in the second period. Bonis has scored 15 goals this season.

“Going on the road, playing Notre Dame, we knew it was a tough feat,” senior Bulldog goaltender Taylor Nelson said. “We knew that coming into the weekend, it would be another playoff-like series.”

Senior Ferris forward Derek Graham netted the final goal for the Bulldogs off of a feed from senior defenseman Chad Billins and Bonis. Billins has tallied at least one point in each of the Bulldogs’ last nine games.

Nelson earned his third shutout of the season, stopping 31 of Notre Dame’s shots.

“Anytime you play Notre Dame, you have a top-notched team. Getting the chance to beat those guys is really exciting,” Nelson said.

In the second night of the series, the Bulldog fans welcomed Ferris home with a sold out crowd. Ferris completed the sweep by vanquishing the Irish 5-1. 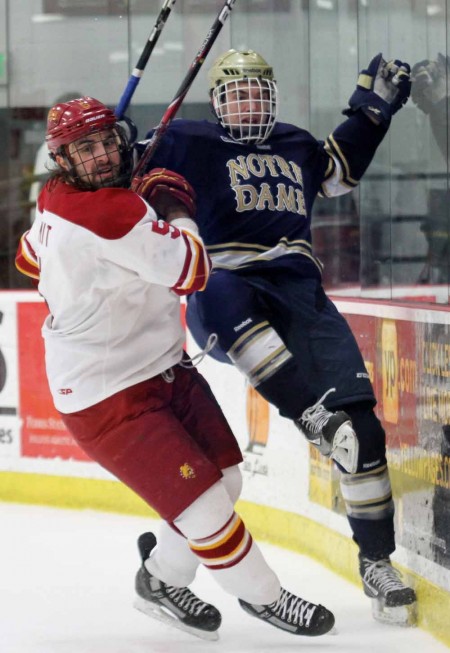 Five Bulldog skaters scored against Notre Dame while Nelson made 27 saves for Ferris. Nelson improved his record to 15-4-2.

The Bulldogs are tied with the 2002-03 squad for second-longest unbeaten streak, which won the regular-season Central Collegiate Hockey Association championship.

“Our goal isn’t quite complete yet,” Nelson said. “We can’t stay satisfied with our [current streak], we have to keep winning. It’s nice to have the glory of winning that series, but we can’t bask in it for too long.”

Ferris is leading the CCHA with a 14-6-4-(1) conference record and is 20-8-4 overall. The Bulldogs are the first NCCA Division I team to reach 20 wins this year.

Ferris has four regular-season games left in the season before they prepare for the CCHA playoffs. Three of FSU’s last four games will be played at home, where the Bulldogs have lost at only once this season.

The nationally No. 1 ranked Bulldogs will next face Bowling Green State Feb. 17-18 in the Ewigleben Ice Arena. The puck drops at 7:05 p.m. for both games. Ferris has swept Bowling Green once this season. n