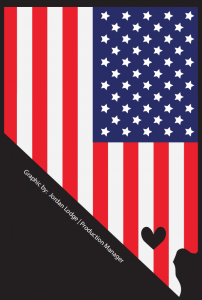 A massacre in Las Vegas left 59 dead and over 500 injured after a terrorist shot into a crowd at the Route 91 Harvest Music Festival.

The mass shooting occurred Sunday, Oct. 1, just after 10 p.m. at the Mandalay Bay Hotel, according to various news reports.

One Ferris student and one alum were in Las Vegas at the time of the shooting. Here are their recounts of the tragedy.

“I was walking out of the bar when we saw people watching TVs on the side of the road. We saw something about a shooting but didn’t think anything of it. Then, the fiancé of the girl I was with called and said to get to the Palazzo Casino where they were at.

When we got there, security told us we were the last ones going in and no one will be getting out. My friend from the Netherlands messaged me first, asking if I was okay. I said, ‘Yeah, of course,’ still not knowing what was going on. Then we all got the notifications of the shooting.

Palazzo is three miles south of the shooting. The whole strip was in lockdown. SWAT teams at every major place on the lookout and on guard. We were in the casino for a couple hours before they got the okay to let people out. The whole street was empty and super quiet. Everyone was walking quietly and quickly to their destinations.

I feel in shock still. I was at that hotel swimming a few hours before everything went down. Doesn’t seem like it has happened or is possible. I watched the videos a couple of times and emotions start to rise as you see them running and hear the gunshots.

The main thing that people should know is that the SWAT team executed their plan so smoothly and was so well constructed that I never felt worried. They shut down the busiest place in mere couple hours and had everyone informed on what was going on. On the way back, SWAT, FBI and cops were on the lookout everywhere because, during the time, the theory of multiple shooters was still being debated.”

“I was currently staying at the M Resort, so maybe two miles down from the Mandalay Bay and the concert.

We were a little kind of shaken up because actually we were supposed to go to the strip that night, but I had gotten sick.

That was horrific to me because it was a clear indication that he didn’t care who he killed, he just wanted to kill.

If you know somebody who was affected by it or [not], try and find a way to help. Donate blood, donate your time, focus on that first before you start thinking about it and pointing your finger. We need to band together as America and help these people before we start pointing fingers.”

“I was actually on top of a double decker tour bus on the same street the concert was on right next to. We heard a lot of fast gunshots and we just saw masses of people running from the concert venue. We didn’t know exactly what had happened. It honestly sounded like quick fireworks going off, until my tour guide asked someone on the ground what was happening and he said, ‘you guys need to get off that bus now there was just a shooting at the concert.’

It was definitely the most terrifying situation I’ve ever been in. You don’t really know what you would do in that type of situation until you’re in it.

My heart breaks whenever I think of the people who were injured or affected or the people who have passed because of this senseless, cowardly man doing this horrific event.

Though bad things happen, good will always conquer. The day after, people were waiting in line in Vegas for longer than five hours just to donate blood because of this tragedy. Although there are bad people in the world, there are more good people and I think that is something we all have to remember. I also want to just say how thankful I am and we all should be, for the police officers and first responders that keep us all safe. They risk their lives to keep ours safe and that is the type of bravery that should not be ignored.”