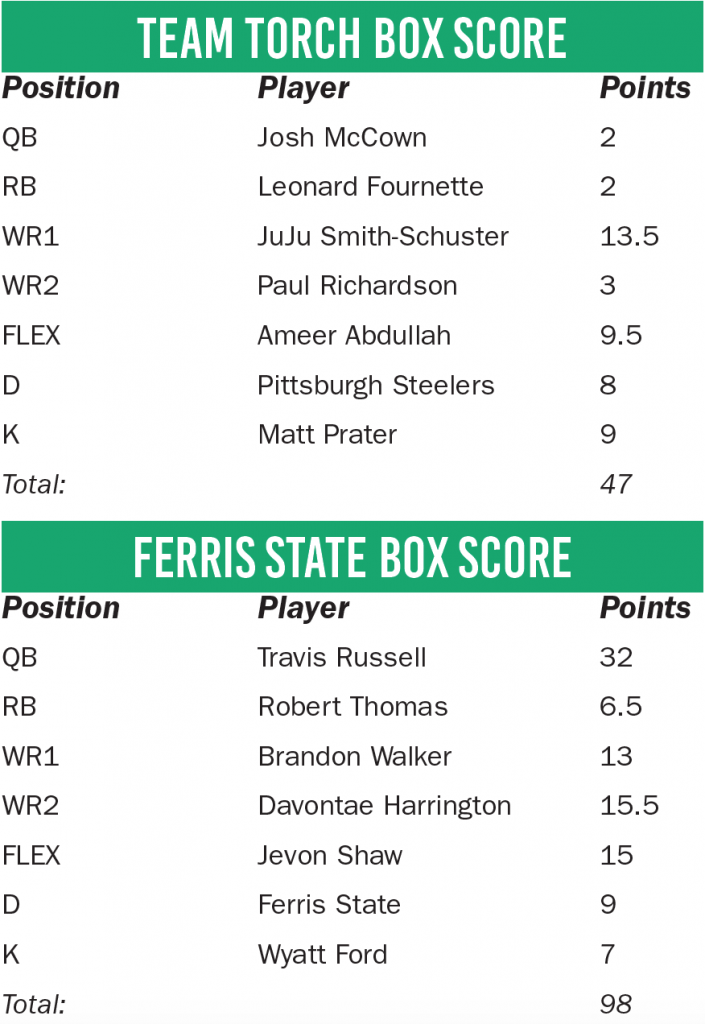 Travis Russell got the start in Ferris’ “W” over the Northern Michigan Huskies and boy, did he play an integral role in the destruction of the Beaulldogs this week.

The wins remain elusive for my fantasy team as we fall to 1-9 to end the regular season. Russell’s astounding 32 fantasy points on five total touchdowns, amassing four through the air and one on the ground, ripped the Husky defense apart.

Meanwhile, the Beaulldogs’ quarterback Josh McCown scored two fantasy points in a loss to the Tampa Bay Buccaneers. The worst QB performance of the fantasy year was followed by the worst RB performance of the year as my running back, Leonard Fournette, also recorded a deuce.

Walker pulled in 13 points, Harrington turned in 15.5 points and Shaw also had a big day with 15 points.

Ol’ reliable Wyatt Ford chipped in seven extra points, though the explosive offense didn’t give him a chance to attempt any field goals. The man with the huge contract deal, Matt Prater, gave the Beaulldogs nine points.

The Ferris defense finished with three sacks and an interception to gain nine fantasy points while the Steelers scored eight.

It’s desperation time for the Beaulldogs if we want to avoid double digit losses. Hopefully these picks can top the Dawgs’ output.

QB: Alex Smith – The Chiefs’ veteran quarterback is having an MVP-caliber year and is well on his way to a playoff berth. Smith should tear up the Giants’ sad excuse for a defense.

RB: Mark Ingram – Ingram has had to fight for snaps all season with rookie Alvin Kamara busting on the scene but after scoring three TDs in last week’s matchup, I’m sure he’ll run wild on Sunday.

WR 1: Antonio Brown – It’s Antonio Brown, need I say more? The guy is leading the NFL in receiving yards and racks up nearly 100 yards week-in and week-out. The man with the hands will rip apart a lackluster Titans team.

WR 2: Stefon Diggs – Not that I want the Vikings to win but if they have to score any touchdowns (hopefully in a high-scoring loss), I think Diggs has a shot at being the guy to find the end zone.

FLEX: Robert Woods – Woods has been unstoppable lately. Not only do I need Woods to perform for the sake of the Bulldogs but the Rams are playing the Vikings, and the Lions could use a Vikings loss right about now.

D: Chiefs – The Chiefs are set to take on the New York Giants—a team with one of the saddest fanbases in the league due to their team’s incompetence.

K: Ryan Succop – The Titans will be on the road against the Steelers on Thursday and the Steelers never make it easy to score in Big Ben’s house. Here’s to hoping the Tennessee can march the ball just close enough for Succop to make a few nice chip shots.