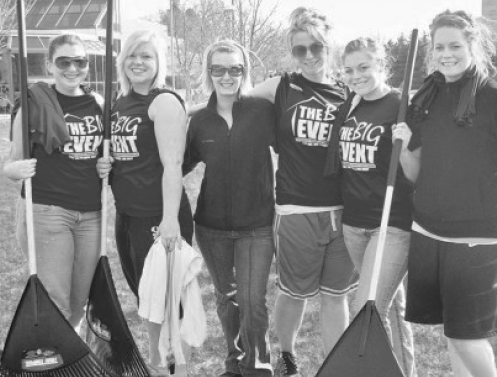 Ferris’ Big Event is just around the corner, and citizens of Big Rapids could not be more excited for their one day of respite from college students’ antics.

“I just love having the students come out to help around my yard during the Big Event every year,” 64-year-old and lifelong Big Rapids resident Evelyn Popsley said. “Though, I wish they wouldn’t play loud music and throw up in my petunia garden the other 364 days a year.”

The Big Event is an annual volunteer effort that sees hundreds of Ferris State students volunteering their time to perform labor around the houses of Big Rapids residents. Drawing 1,620 student volunteers last year, the event acts as a way of thanking the surrounding community and encouraging humanitarianism.

Yet residents of Big Rapids aren’t the only ones benefiting from the annual volunteer event.

“It just makes me feel so good to help out citizens in the surrounding area,” Ferris technical and professional communication junior Carley Succotash said during last year’s event. “I love—”

Succotash could not be reached for further comment, as she stopped mid-sentence to take several selfies with a rake in front of a house she was meant to be working on. At press time, the photo had accumulated 23 likes on Instagram, after being edited with a favorable filter.

Though the event is typically well-received by those it helps to serve, not all Big Rapids residents are thrilled after being cold called by students offering their volunteer efforts.

“These prissy college kids think they’ve done a service just because they offer to clean out my gutters,” 71-year-old Paul Gerbstreet said. “I was fighting in ‘Nam when I was their age. They don’t know real service.”

Gerbstreet believed that the students’ actions during the Big Event are more about selfish purging of guilt, rather than actual good-hearted service for the community.

“Just because they act civil for one day doesn’t mean they get a pass to be total assholes for the rest of the year,” Gerbstreet said.

The Big Event will take place on April 16, and students or entire organizations can volunteer until the day of the event.