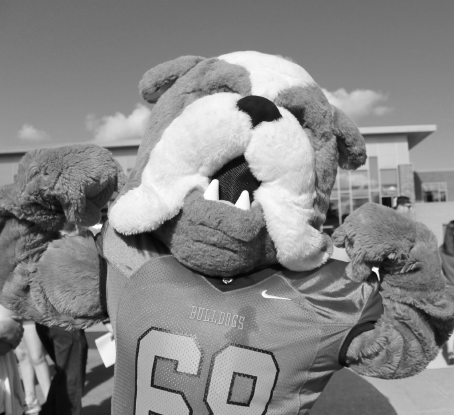 Many Ferris students may have noticed a recent absence of the school’s mascot, Brutus.

Instead of being stalked by Brutus, Bulldog fans have been followed around at sporting events by Brutus’ uglier, scarier-than-hell cousin, Rufus. The big, blue-eyed Bulldog, that seemed to have hit every branch on his fall down the ugly tree, had replaced Brutus before the beloved mascot returned from a long hiatus at the homecoming football game against Ashland last Saturday.

What many don’t know though, is that the hiatus which triggered the social media centered campaign #BringBrutusBack was a marketing scheme that kind of happened by accident.

“Honestly, I just got trashed after a long day of being trapped in that sweaty costume and got so hammered that I misplaced the whole costume, except for the tail, which was the only thing that I was wearing when I woke up from my night out,” said the person inside the Brutus costume, whose real name has never been released out of customary mascot tradition.

The mascot said that he was floating down the river doing beer bongs all day and forgot that he had to work an event for incoming freshman. He put on his costume and made his way to the event, but went to a local bar when he was done working still wearing his costume.

“Basically what happened is that I bet my buddy $20 that I could take five straight tequila shots without puking. The last thing I remember was him telling me that I was a dumbass and slapped $20 into my hands. Next thing I know, I wake up and the whole suit is gone. I’m just glad I found it under my bed before homecoming,” said the mascot.

Luckily enough for the person beneath the Brutus suit, after walking into work with their tail between their legs and begging for forgiveness, they were told that everything was all right and that school administrators would use the missing costume as a marketing scheme to gain followers on social media.

Many Ferris-related social media accounts used the hashtag, “#BringBrutusBack” in hopes to gain more traction on the social media game and get as many favorites and retweets as possible in order to satisfy their constant need for acceptance from their followers.

One account owner said, “I tweeted something with the #BringBrutusBack hashtag and got like six retweets and 15 favorites which is, like, the most I’ve, like, ever gotten. I’ve never before felt so loved. I honestly cried a little.”

Ferris twitter accounts that used the hashtag gained an average of four followers per account, which in the grand scheme of things isn’t jack-shit, but to some people, those four followers can bring a lifetime of an overwhelming feeling of acceptance.