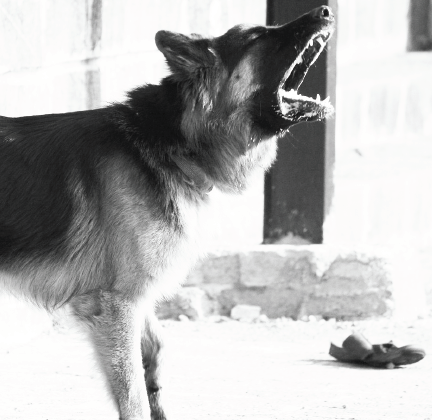 In an attempt to discourage marijuana use, the Department of Public Safety (DPS) has decided to place drug sniffing dogs in each of the residence halls on campus.

“I like dogs a lot and I hate the Devil’s lettuce, so the whole thing just kind of fell together,” said Director of DPS Bruce Borkovich.

Despite his optimism, students have a slightly different take on the benefits of the program.

“I don’t care that they’re trying to decrease the number of people that smoke pot,” said Ferris accounting freshman Chris Dorian. “I just can’t get over all the damn barking at all hours of the night.”

Sources report that upon being placed in the buildings, the dogs immediately went crazy, running through the halls sniffing and scratching at dozens of doors.

“As soon as they handed me the dog, he ripped the leash right out of my hand,” said Brophy McNerney Resident Advisor Pamela Krut. “It’s like the poor thing didn’t know where to turn first, he was so overwhelmed.”

At night, people walking past the residence halls can hear the dogs barking and howling as they constantly detect drug users.

“I used to smoke weed in the dorms,” said Ferris biochemistry sophomore Joshua Loomperskin. “But I go off campus to do it now because it’s really hard to enjoy a good high with all the noise.”

The initiative has been labeled a failure by a number of county officials as its biggest accomplishments include spurring a 15 percent decrease in the number of students living on campus next semester and completely clogging the Mecosta County court system.

“I wish they would get rid of the dogs,” said District Attorney Michelle Cooper. “It’s become a real pain in the ass. We’ve had to try over 40 cases of possession just this month. I’m actually an advocate for legalization now.”

Steps are currently being taken to remove the dogs from the halls so that smokers and non-smokers alike can once again get a good night’s sleep.