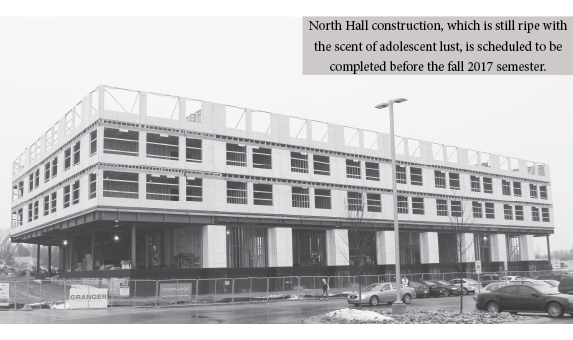 Elevator shafts aren’t the only things being erected at the North Hall construction site.

At 1:30 a.m. Monday, Jan. 23, a pair of naked Ferris students were chased out of the construction area by Ferris Department of Public Safety foot patrol officers.

The officers received a call at 1:27 a.m. to investigate, but the exhibitionist couple—or more likely only the male student of the pair— had already finished by the time officers arrived at the scene.

“I’ve been at Ferris almost four years and I’ve done my time. I’ve gotten busy in the library study rooms, in the bathroom of the UC and done it a few times in the pool area at the Rec. There was no way I was going to graduate before christening the new building,” Ferris history senior Fred Sharpleton said.

Sharpleton and his girlfriend, Ferris social work senior Jaclyn Maliki, have been issued warrants for public indecency and trespassing.

Witnesses to the lovemaking incident recall seeing the couple change positions multiple times in order to sully as much of the building’s infrastructure as possible.

“It was really cold being that high up and exposed to the wind,” Maliki said. “It was still worth it, though. I can’t wait for them to start bringing in furniture so we can carve our names into the first headboard they move in.”

At press time, the young couple was trying to devise a way to have sex on top of the grill at the Rock Cafe’s Mongo Grill without getting caught or burning their flesh.