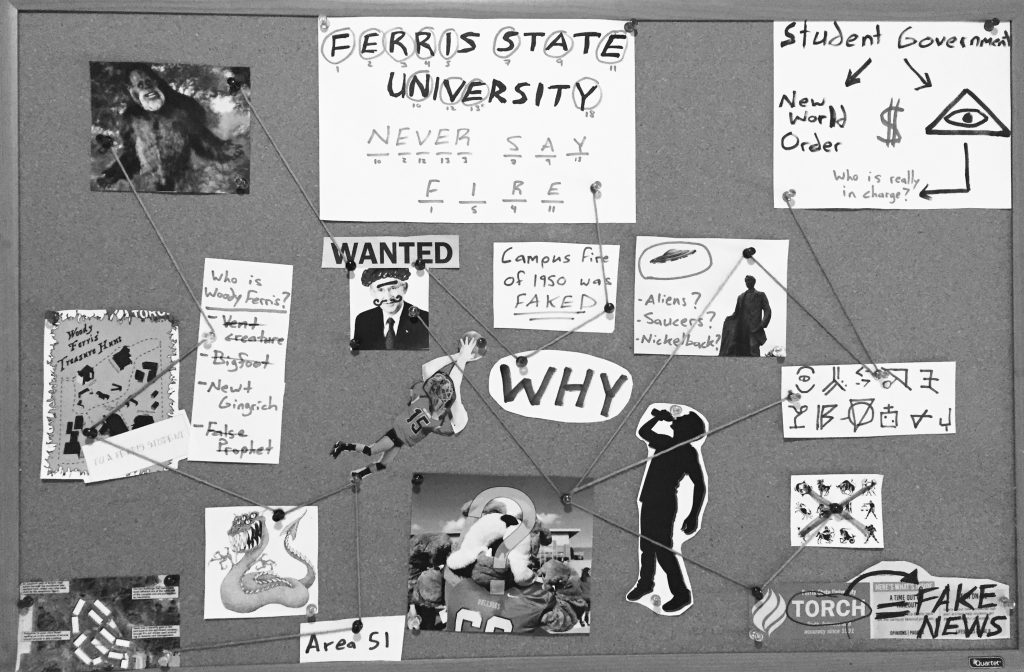 OK, pay attention because I don’t have much time and the feds are going to be triangulating on my position any moment now.

You think Ferris State Institute burned down in 1950? You think THE MEDIA (a.k.a. the Torch) is feeding you the truth? You think this university is led by a regular human and not a reptilian/pleiadian paranormal hybrid? You’ve been spoon-fed nothing but lies, my friend.

I’m going to explain everything, but you’ll have to burn this after reading. They must not know that their secret is out.

See, Area 51 is actually located in Big Rapids, which is where they created the perfect athlete so that Ferris basketball could win the national championship, thus diverting attention away from chemtrails and gay frogs.

However, they also accidentally created a monster which inhabits the vent near Hallisey Hall and was discovered by a mysterious man with the alias, “Woody Ferris.” So who is Woody Ferris?

Well, at first I thought it was Bigfoot but he was actually illegally poached by President David Eisler, who is also actually the one who wears the Brutus costume during campus events.

Want proof? Ask yourself this: have you ever seen Eisler and Brutus in the same room together? Of course you have! That’s because Eisler has been cloned to do Woody’s bidding!

Anyway, if you unscramble some letters of “Ferris State University,” you get the phrase, “Never say fire.” The deception is hidden right in plain sight! Ferris’ great fire of 1950 was faked in order to cover up extra-terrestrial activity which resulted in the destruction of most of the underground secret government labs that still operate below campus.

If you follow the money, you’ll see that Ferris’ student government is acting as a shadow organization to mask the real puppetmasters running the world and controlling the research going down in those labs.

What’s happening in the labs is truly horrific. They’re experimenting on freshmen to…

[DO NOT BE AFRAID]

[WE ARE THE FUTURE]