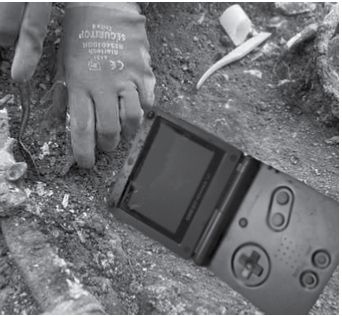 Digital animation and game design freshman Tim Rocket stumbled upon what appeared to be an ancient relic half-buried in the melting snow somewhere near the Rock on the morning of Thursday, Dec. 13.

Fascinated with his find and filled with a desire to be ‘like that chick in those cave explorer games,’ [1] Rocket brought the relic to us at the Tire Fire, believing that a reporter by the name of Pepe Silvia could help him decipher the sigils on the archaic artifact. Tire Fire employment records nor archives show any record of such a reporter existing. The item has been described as a crimson hinged square with a black box on the top half and having small protruding circles from the bottom and presumed to be inscribed with text of origin yet to be discovered. The artifact was transferred to the anthropology department where dozens of disinterested ANTH 121 students vaguely glanced at the object. It was eventually set aside and had been forgotten about. After the long winter break, anthropology senior Dante Alighieri came across the relic while cleaning out an office and tried to sell it on eBay for a price of $10,000. At press time there were no bids on ‘Ancient Relic Magic Rune Code Stone Artifact Red Square Box Old Historic.’