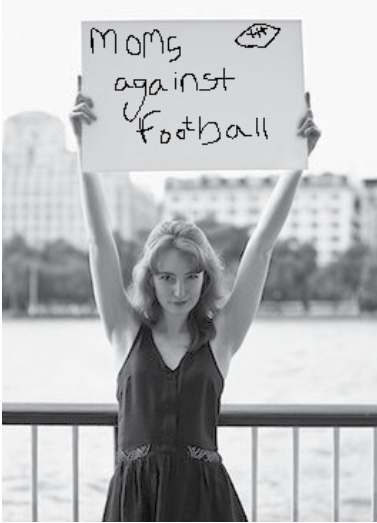 The question of whether or not youth football should continue to be allowed to stick around has resulted in constant debate.

However, this issue has been surpassed by a more pressing concern regarding youth involvement with the sport.

The real issue that is now at hand is the fact that our youth need to be banned from watching the sport of football altogether, as it is simply too violent for their pure little eyes to witness.

The violence, which some describe as “heartbreaking” and even “enough to make me want to throw up my SpaghettiOs,” has reached malicious new heights.

In addition to being violent enough to make even the strongest of people shed tears and the strongest of stomachs lose their lunch, there’s evidence to suggest that it’s destroying the futures of our youth.

New studies have come to show that watching football as a child will raise that individual’s odds of being convicted of a felony due to crime that is violent in nature by a staggering 87 percent.

After hearing of this new information, parents all around Mecosta County were appalled.

“I feel like the sport is just too disgusting in its entirety for my young children. The hits are downright vicious, and don’t even get me started on the hits quarterbacks are taking nowadays,” Marissa Upright, a mom of three young boys, said. “And now to learn that my boys could be personally affected by witnessing this R-rated butchery, it’s just horrendous.”

It just so happens that the views of this issue don’t stop in Mecosta County. In fact, it has become so widespread that even government officials in Washington, D.C. have been keeping a close eye on the controversial topic.

This is especially true after National Football League Commissioner Roger Goodell supposedly tried to bribe President Donald Trump in an effort to coerce the president to come out and denounce any future speculation on any potential child viewing restrictions in the future.

Neither Trump nor Goodell were willing to comment on this issue, but a certain high-ranking government official who chose to remain anonymous did give a brief statement on the topic.

“As many of you know, the concern of continuing to allow people to subject our nation’s youth to the sport of football has been a very controversial topic for some time now. Here in the capitol, we have had many discussions on what we should do going forward,” the anonymous government official said. “We have spoken to Mr. Goodell and we have also been working with our local Parent Boards to determine the best course of action that will be in the best of all parties involved.”

This is an issue that will result in a lot of debate through the coming months while tough decisions are being made.

The opposing sides could lead to this getting very ugly real soon, given the fact that this is the most glaring issue in the country as we speak.

The potential bloodshed that may ensue could get brutally violent, perhaps even more violent than the sport of football itself.